or better know as Naples.

First impressions were bad. Dirty, noisy and run-down. These were the first thoughts that I had on arriving in Naples. I thought that maybe I was being a bid hard on the city so decided to give it a fair chance.

After spending the morning at Pompeii (more on that later) and taking a short breather from the heat, I decided to give Naples a chance. Neither of the kids wanted to join me for a jaunt around town exploring (looking back, I wish I had saved my feet), so I headed out on my own and had an amazing sunset. 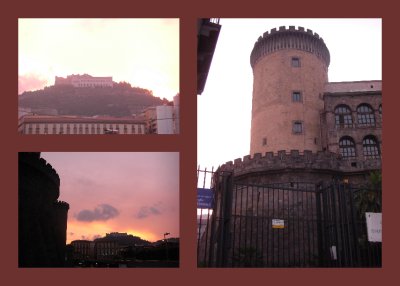 All I can say is that sometimes, first impressions are right! I hated Naples! Yes, I said it...HATED IT. I'm sorry if you live there or if you love the city for some reason....I promise not to hold it against you personally...I just didn't like it at all.

I wandered around getting totally lost (seems a theme for the Italy trip in general). I was nervous the entire time. I imagined getting pulled into one of the creepy, dirty alley/roads and being held at knife-point and my life threatened to give up all my money. I imagined being bashed over the head and left for dead for someone to find me the next morning...yep! It really was that bad!

After finally determining that I had given the city my best try (this consisted of walking around for about two hours), I gave up and found the nearest Taxi to take me back to my hostel. Now that is another story.....

I would label my taxi ride as 'the worst possible, hair-raising, white knuckles gripping, eyes wide" experience of my life. It was better (or worse) than the most gravity defying roller coaster that I have ever ridden! Driving through an alley/road that was obviously made many years ago for a horse drawn buggy (if that would even fit), at aprox 50kph. There was barley enough room for the car to even get through....then on top of that, the driver swerved around people (almost skinning them with the mirror), past parked cars (I still dont know how he did this), past old folks walking with canes, little children playing ball and around fruit stands....all without one minor incident (except me nearly pissing myself).. I think I finally breathed when the driver finally pulled up to my place and stopped. Whew....even Vietnam wasn't that bad with all the moto-bikes and such!

Now....back to the boring stuff.

Pompeii was actually quite interesting. It was quite well preserved in some places and it was much larger than I had imagined. It was full of photo opportunity and also stray dogs. Yep, stray dogs...they were everywhere. Other than looking a little emaciated, they looked pretty harmless. They just lounged around and walked like they owned the place. 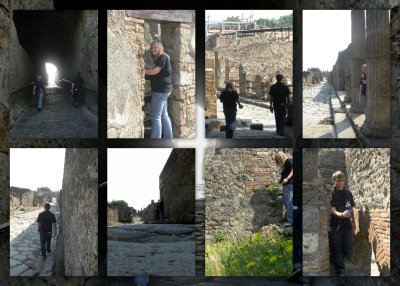 Overall, I would say that Pompeii could be a miss if you were traveling on a tight schedule and if you go I would certainly recommend that you day-trip from somewhere other than Naples! 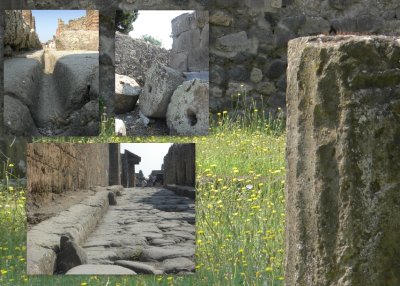 Eeek! Glad to hear there was no head bashing or knife gouging...now you know how I felt about Manila. =) ... un incubo terribile...(terrible nightmare)