A busy day in Rome

I spent an enjoyable morning out on my own. Was only going for a short walk around while the weather was cool and ended up getting lost (sort-of) several times while wandering around searching out interesting alleyways and such. I came across this church. It was so peaceful and I sat here at the fountain watching the people come and go while I enjoyed my Italian breakfast. 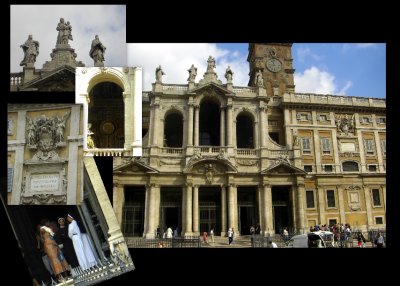 I visited the Spanish Steps (again) and had the place mostly to myself with the guy that cleans the steps each morning doing his daily duties. 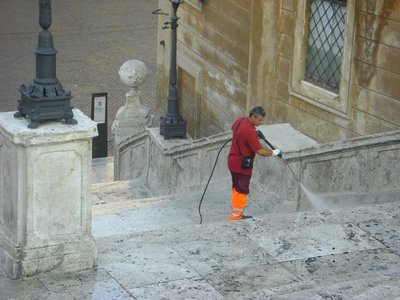 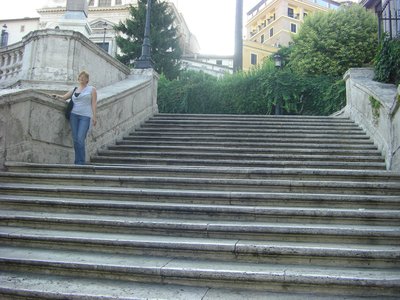 Continuing to meander, I found myself at the Pantheon. It was very peaceful here at this time of day so I sat for a while and watched the morning activities, and engaged in conversation with a young gentleman who was out for a morning walk with his Doberman and Min-pins. It was quite a cute site to see and made me miss my Aco back at home with Mom.

When I arrived back to the apartment, the weather was turning hot. The kids and I headed out for some more sight-seeing.

We wandered out to see this macabre sight. It was quite interesting. According to my Lonely Planet book, there are bones from approximately 4,000 Capuchin monks used here to decorate the walls. It was a little disturbing to see and I have to wonder, what would make someone want to decorate with bones? It made me wonder if the particular monk that designed this was some sort of wanna-be serial killer or something. 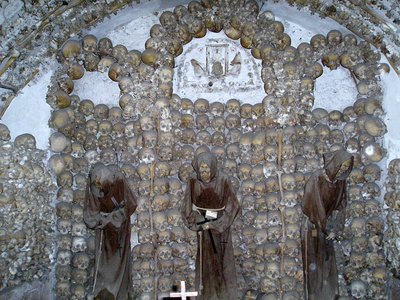 We then headed to the Vatican where the mob of people quickly made us realize that it was Wednesday and the Pope would be apearing today. We hustled in with the crowd and waited to see the Pope. It was interesting and I can now say that I have seen the Pope but the Swiss Guards were the most interesting for me. I love their uniforms! 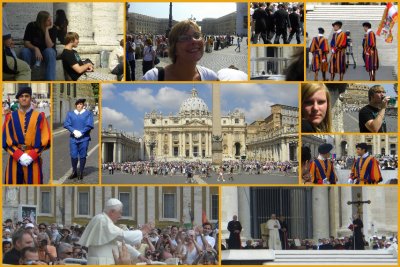 From here we made our way to the Pantheon. Although we had already seen it several times, this was the first time that we had made it during the daytime when it was open. It was spectacular! I don't really know what I was expecting but the entire interior was polished marble. It was huge and looked like it was built yesterday. It gleamed with the sunlight streaming in through the hole in the dome. 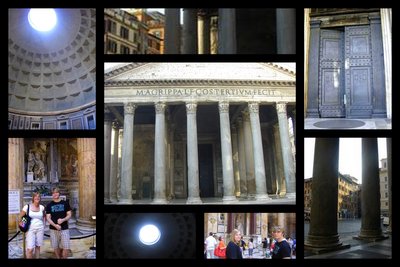 After enjoying an overpriced lunch at the Pantheon, Trinity and I headed back to the apartment in the now sweltering heat! Along the way, we had to take a picture of..... 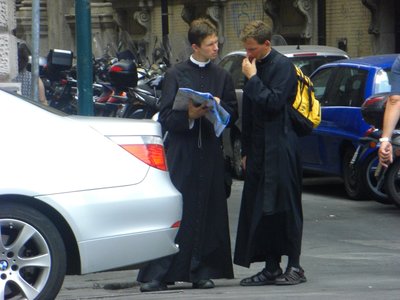 A good day in Rome.